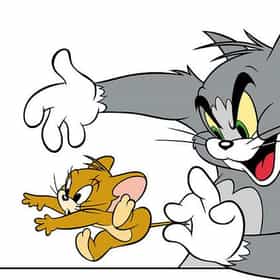 Tom and Jerry is an American animated series of short films created in 1940, by William Hanna and Joseph Barbera. It centers on a rivalry between its two main characters, Tom Cat and Jerry Mouse, and many recurring characters, based around slapstick comedy. In its original run, Hanna and Barbera produced 114 Tom and Jerry shorts for Metro-Goldwyn-Mayer from 1940 to 1957. During this time, they won seven Academy Awards for Animated Short Film, tying for first place with Walt Disney's Silly Symphonies with the most awards in the category. After the MGM cartoon studio closed in 1957, MGM revived the series with Gene Deitch directing an additional 13 Tom and Jerry shorts for Rembrandt ... more on Wikipedia

lists about Tom and Jerry

Tom and Jerry is ranked on...

#34 of 129 The Best Cartoons of the '90s 768.6k VOTES The best cartoons of the 90s are those the top animated series that ran between the years of 1990 and 2000 and features Nick...
#9 of 103 The Most Unforgettable '80s Cartoons 171.3k VOTES Get ready to feel some serious nostalgia after reading through this list of the top 80s cartoons. Let's face it. The best ca...
#34 of 147 The Greatest TV Title Sequences Ever 43.8k VOTES The greatest TV title sequences of all time are those memorable opening credits scenes from many of the best TV shows of all...
#142 of 145 People who voted for Tom and Jerry... People in the Central US are 4x more likely to vote for this The Most Annoying Kids Shows of All Time 84.5k VOTES There's something about TV shows made for children that can really put the rest of the world on edge. The loudness, the obno...
#4 of 85 The Best Hanna-Barbera Cartoons You're Dying to Watch Again 45.6k VOTES We've traveled through cartoon history to bring you a list of all the best Hanna-Barbera cartoons. William Hanna and Joseph ...
#14 of 238 The Best Cartoons to Watch Stoned 64.9k VOTES Do you often wonder, “what are the best shows to watch high?” Or, more specifically, “what are the best cartoons to watch hi...
#11 of 134 The Best Cartoon Network TV Shows 496.6k VOTES Cartoon Network shows have been bringing some of the funniest and most action-packed cartoons that both kids and adults can ...
#11 of 135 The Very Best Cartoon TV Shows 40.3k VOTES The very best cartoon series shows on television, ranked from best to worst. This list of the greatest cartoon series shows ...
#11 of 70 The Greatest TV Shows of the 1950s 22.2k VOTES List of the top TV shows of the 1950s, as ranked by television enthusiasts and fans. In the 1950s, television was still rela...
#1 of 23 The Greatest TV Shows About Cats 243 VOTES Chances are you're either a dog person or a cat person, and if you're a dog person it means you probably strongly dislike ca...
#1 of 25 The Best Cat Cartoons 323 VOTES The best cartoons have been filled with animals rather than humans since the beginning of animation. From Garfield to The Pi...
#4 of 35 The Best 1970s Animated Series 1.3k VOTES These are the very best 1970s animated series, ranked from best to worst by user votes. The animated series of the 1970s are...

Tom and Jerry is also found on...