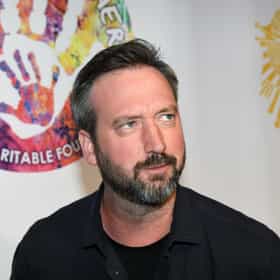 Michael Thomas Green (born July 30, 1971) is a Canadian comedian, actor, filmmaker, and talk show host. Known for his own unique brand of shock comedy, he found mainstream prominence via his MTV show aptly titled The Tom Green Show (1994–2000). Green is also known for his roles in the Hollywood films Road Trip (2000), Charlie's Angels (2000), Freddy Got Fingered (2001; directed by Green himself), Stealing Harvard (2002) and Shred (2008). He was briefly married to actress Drew Barrymore (2001–2002), who co-starred with him in Charlie's Angels and Freddy Got Fingered. In June 2003, Green served as a guest host on Late Show with David Letterman, which led to him hosting his own late-night ... more on Wikipedia

The Best Tom Green Movies 318 votes List of the best Tom Green movies, ranked best to worst with movie trailers when available. Tom Green's highest grossing mov...
Whatever Happened To Tom Green? 10.6k views For a specific group of people who were glued to MTV from 1999 to 2003, Tom Green was the be-all and end-all of comedy. His ...

Tom Green is ranked on...

#55 of 170 The Greatest White Rappers of All Time 496k VOTES Though it took a while for the music to catch on with them, some of the best rappers in hip hop history are white. While thi...
#25 of 102 People who voted for Tom Green... also upvote Star Wars Franchise on The Best Alien Movies Ever Made also upvote Star Trek Franchise on The Best Movies Based on TV Shows The Funniest Canadian Comics & Actors of All Time 43.4k VOTES A list of notable comedians from Canada, ranked by comedy fans. Many of these comic actors, stand-ups and humorists, origina...
Every Person Who Has Hosted 'Saturday Night Live' 52.1k VIEWS Live from New York! It's Saturday Night! This is a list of all Saturday Night Live hosts, in reverse order,...
#14 of 107 Who Is The Most Famous Tom/Thomas In The World? 2k VOTES How many celebrities named Tom can you think of? The famous Tommys below have many different professions, as this list inclu...
#155 of 157 The Best People Who Hosted SNL In The '00s 2.3k VOTES Saturday Night Live went through some big changes in the 2000s - from the 9/11 attacks to the writers strike that shortened ...
17 Celebrities Who Were Diagnosed with Cancer Before the Age of 40 97.9k VIEWS Cancer doesn't discriminate, and many celebrities have been diagnosed with cancer before 40. Fortunately, it seems that...
#22 of 32 Celebrities We Want To See On Dancing with the Stars‎ 3.9k VOTES Some actors and actresses are obvious triple-threats and some are not, but it's always interesting to see which stars can bu...
22 Celebrities with One or Fewer Testes 423.5k VIEWS Usually caused by some sort of medical situation such as a surgery, birth defect, cancer or an injury, some men have one, or...

Tom Green is also found on...