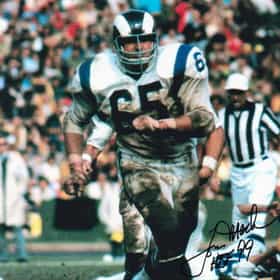 Thomas Lee Mack (born November 1, 1943) is a former American football player. He was inducted into the Pro Football Hall of Fame in 1999. A native of Cleveland, Ohio, Mack played college football at the end and tackle positions for the University of Michigan from 1963 to 1965. He was a starter on the 1964 Michigan team that won the Big Ten Conference championship and defeated Oregon State in the 1965 Rose Bowl. He was selected as a first-team All-Big Ten player in 1965 and was inducted into the University of Michigan Athletic Hall of Honor in 2006. Mack was selected by the Los Angeles Rams with the second pick in the 1966 NFL Draft and played at the left guard position for the Rams for ... more on Wikipedia

Tom Mack is ranked on...

Tom Mack is also found on...