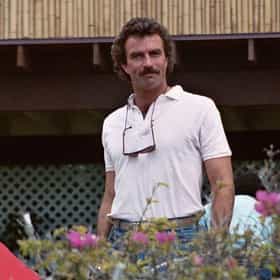 Thomas William Selleck (born January 29, 1945) is an American actor, film producer, and California Army National Guard veteran. He is most known for starring as private investigator Thomas Magnum in the television series Magnum, P.I. (1980–1988), as Peter Mitchell in Three Men and a Baby, and as NYPD Commissioner Frank Reagan in Blue Bloods on CBS since 2010. Selleck also had a recurring role as Lance White, the likeable and naive partner of Jim Rockford (played by James Garner) on The Rockford Files and also played Police Chief Jesse Stone in a series of made-for-TV movies based on Robert B. Parker novels. Selleck has appeared in more than 50 film and television roles since Magnum, ... more on Wikipedia

Tom Selleck is ranked on...

Tom Selleck is also found on...