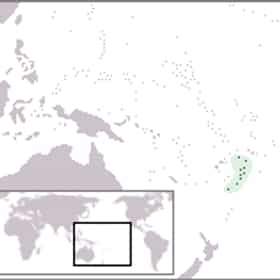 Tonga, officially the Kingdom of Tonga, is a Polynesian sovereign state and archipelago comprising 177 islands with a total surface area of about 750 square kilometres scattered over 700,000 square kilometres of the southern Pacific Ocean, of which 52 islands are inhabited by its 103,000 people. Seventy percent of Tongans reside on the main island of Tongatapu. Tonga stretches over about 800 kilometres in a north-south line – about a third of the distance from New Zealand to Hawaii. It is surrounded by Fiji and Wallis and Futuna to the northwest, Samoa to the northeast, Niue to the east, Kermadec to the southwest, and New Caledonia and Vanuatu to the farther west. Tonga became known as ... more on Wikipedia

Tonga is ranked on...

#248 of 294 The Prettiest Flags in the World 1.3M VOTES What is the best flag in the world? What is the most beautiful flag in the world? Well, these are the best country flags in ...
#118 of 169 The Most Beautiful Countries in the World 261.5k VOTES There's nothing like traveling and seeing the world to broaden your horizons and the countries on this list are the most bea...
#174 of 197 The Countries with the Best Food 443.6k VOTES List of Countries with the Best Food ranked from best to worst. There are many contenders for the title of “country with the...
#137 of 248 The Best Countries to Travel To 192.9k VOTES Which country is the best to travel to? The options are endless and vary from person to person. Do you prefer to experience ...
#96 of 114 The Best Countries to Move To 44.5k VOTES List of the Best Countries to Move To ranked from best to worst. Every year millions of people decide to leave the country w...
The 71 Countries Where It's Still Illegal to Be Gay 21k VIEWS List of All the Countries Where It's Illegal to Be Gay ranked by notoriety. Although gay marriage is now legal in the U.S. i...
Swine Flu Cases Around The World 6.9k VIEWS List of swine flu cases around the world. Swine flu outbreaks and swine flu countries are found here to show the impact of s...

Tonga is also found on...