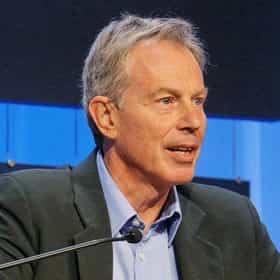 Anthony Charles Lynton Blair (born 6 May 1953) is a British politician who served as Prime Minister of the United Kingdom from 1997 to 2007 and Leader of the Labour Party from 1994 to 2007. He was Leader of the Opposition from 1994 to 1997. As of 2019, Blair is the last British Labour Party leader to have won a general election. From 1983 to 2007, Blair was the Member of Parliament (MP) for Sedgefield. He was elected Labour Party leader in July 1994, following the sudden death of his predecessor, John Smith. Under Blair's leadership, the party used the phrase "New Labour", to distance it from previous Labour policies and the traditional conception of socialism. Blair declared ... more on Wikipedia

Tony Blair is ranked on...

#18 of 22 22 Hilarious Pictures of World Leaders with Man Buns 617 VOTES Politics can be stressful. Maybe that's why some folks out there are asking, "What if world leaders had man buns?"...
Famous Bilderberg Group Members 62.6k VIEWS List of Famous Bilderberg Members ranked by fame and popularity. The Bilderberg Group is an annual conference comprised of p...
Famous (Alleged) Illuminati Members 18.9M VIEWS List of all famous Illuminati members, past and present. . . supposedly. The following list of alleged celebrity Illuminati ...

Tony Blair is also found on...