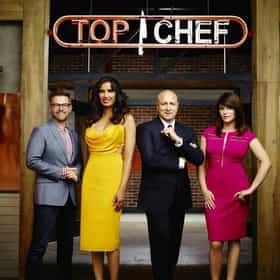 Top Chef is an American reality competition show on the cable television network Bravo, that first aired in 2006, in which chefs compete against each other in culinary challenges. They are judged by a panel of professional chefs and other notables from the food and wine industry with one or more contestants eliminated in each episode. The show is produced by Magical Elves Productions, the same company that created Project Runway. Nine international adaptations of Top Chef have been produced, two of which, the Franco-Belgian Top Chef and the Dutch Topchef, have had four seasons each. In the United States, the show has had two spin-offs: Top Chef: Masters, featuring established, ... more on Wikipedia

Top Chef is ranked on...

#675 of 802 The Best TV Shows To Binge Watch 1.2M VOTES Bored? Not anymore! These are the best TV shows for binge-watching. The greatest television shows in the world are ranked he...
#772 of 2,297 The Greatest TV Shows Of All Time 1.5M VOTES Choosing the best TV shows of all time means taking into account the best TV dramas, the best TV comedies, the best cartoons...
#50 of 138 The Best TV Shows Returning In 2020 15.2k VOTES The best TV shows returning in 2020 are a mix of long-awaited series finales, canceled shows that have been renewe...
#5 of 45 Reality Shows That Involve Actual Skill 10.6k VOTES Ever come across one of those reality shows that you found strangely addicting, whether or not you’re tend to love or hate r...
#6 of 22 The Reality Shows You Would Most Want to Win 6.1k VOTES You can't turn on the TV these days without accidentally running into an epic reality competition show. From dancing and sin...
#25 of 31 What to Watch If You Love 'Survivor' 239 VOTES Survivor is one of the first reality competition shows to work in the United States, and its success is evidenced ...
#3 of 25 Current Reality Shows You Wish You Were On 1k VOTES Reality television can be a weird thing. In many cases, being the star of a reality TV show puts the stars under heavy scrut...
#53 of 100 The Best Rainy Day Shows To Watch When You're Bored And Stuck Inside 1k VOTES Whatever reason you're stuck inside, due to rain or some good, old-fashioned social distancing,  you can at least relax...
#2 of 34 What to Watch If You Love 'Chopped' 11 VOTES Every episode of Chopped kept viewers on the edge of their seats with one of the most intense cooking competitions ever...
#12 of 60 The Best Reality TV Shows In 2019 3.1k VOTES UPDATED: Check out The Best Reality TV Shows of 2020! Not only are there lots of new reality TV shows premiering...
#272 of 476 The Best Television Shows of the 2000s 148k VOTES Some great TV shows came out of the 2000s, while some have even lived on. Here's a list of the best shows that aired from 20...
#5 of 16 The Best Current Bravo Shows 764 VOTES From reality television to comedy, current shows on Bravo cover a unique spectrum of entertainment not quite ...
#20 of 31 The Most Stressful Reality Shows In 2019 196 VOTES Let's face it, a list of stressful reality shows in 2019 is also bound to be a list of shows that many of us will totally sh...
#9 of 98 The Best Cooking TV Shows of All Time 16k VOTES Here are the very best cooking shows on television, ranked from best to worst. Including shows from the Food Channel, B...
#20 of 32 The Best 2000s Reality Shows 1.4k VOTES These are the best 2000s reality shows ranked from best to worst by user votes. Some great 2000s reality programs are center...
#12 of 71 The Best Bravo TV Shows 16.4k VOTES List of popular Bravo shows, ranked from best to worst. This list of the top current and cancelled Bravo TV series includes ...
#30 of 44 The Best Talent Shows Ever on TV 10.5k VOTES The best talent shows on TV can expose the world to hidden talent and give people new careers. For example, Susan Boyle beca...
#11 of 50 The Most Exciting Reality Competition Shows Ever Made 451 VOTES The best reality competition TV shows ever aired are some of the most exciting and competitive series to watch on telev...