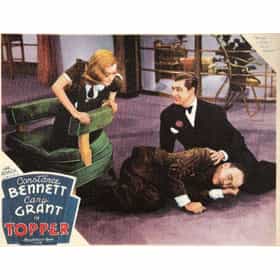 Topper is an American comedy film starring Constance Bennett and Cary Grant which tells the story of a stuffy, stuck-in-his-ways man, Cosmo Topper who is haunted by the ghosts of a fun-loving married couple. The film was adapted by Eric Hatch, Jack Jevne and Eddie Moran from the novel by Thorne Smith. The movie was directed by Norman Z. McLeod, produced by Hal Roach, and distributed by Metro-Goldwyn-Mayer. The supporting cast includes Billie Burke and Eugene Pallette. Topper was a huge hit with film audiences in the summer of 1937; since Cary Grant had a percentage deal on the film, he made quite a bit of money on the film's success. Topper was followed by the sequels Topper Takes a ... more on Wikipedia

Topper is ranked on...

#463 of 1,204 The Absolute Funniest Movies Of All Time 1M VOTES The funniest movies of all time, ranked by fans. What are the funniest movies ever made? From Airplane! to The Jerk to The 4...
#14 of 43 The Funniest Comedy Movies About Ghosts 1.9k VOTES There's a fine line between terror and comedy when it comes to the funniest ghost movies. The top comedies about ghosts feat...
#13 of 74 People who voted for Topper... are 24x more likely to vote for Arsenic and Old Lace on this list are 7x more likely to vote for Bringing Up Baby on this list The Very Best Cary Grant Movies 17.7k VOTES List of the best Cary Grant movies, ranked best to worst with movie trailers when available. Cary Grant was one of the most ...
#26 of 113 The Best Screwball Comedies 6.7k VOTES A list of all the best screwball comedy movies ever made, many of which are streaming on Netflix and Amazon Prime. OK well m...
#3 of 50 The Best '30s Comedy Movies 2.1k VOTES The Golden Age of Hollywood was also a golden age of comedy. Comedy titans like the Marx Brothers and Charlie Chaplin releas...
#52 of 80 The Best '30s Romance Movies 929 VOTES This list tanks 1930s romance movies from best to worst, with those that have aged like fine wine at the top and those that ...
#24 of 34 The Best Movies About the Afterlife 1k VOTES What is it about the afterlife that piques our curiosity? Some of the most intriguing books and movies discuss the possibili...
#5 of 216 The Best Movies of 1937 3.4k VOTES List of the best movies of 1937, with movie trailers when available. These top movies of 1937 are listed by popularity, so t...

Topper is also found on...