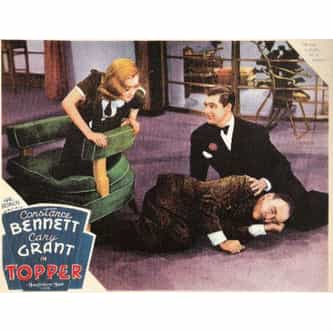 Topper is an American comedy film starring Constance Bennett and Cary Grant which tells the story of a stuffy, stuck-in-his-ways man, Cosmo Topper who is haunted by the ghosts of a fun-loving married couple. The film was adapted by Eric Hatch, Jack Jevne and Eddie Moran from the novel by Thorne Smith. The movie was directed by Norman Z. McLeod, produced by Hal Roach, and distributed by Metro-Goldwyn-Mayer. The supporting cast includes Billie Burke and Eugene Pallette. Topper was a huge hit ... more on Wikipedia

Topper IS LISTED ON