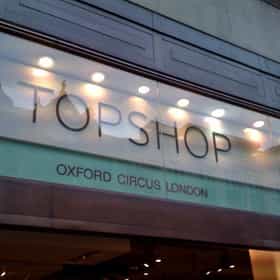 Topshop is a British multinational fashion retailer of clothing, shoes, make-up and accessories. It has around 500 shops worldwide – of which some 300 are in the UK – plus online operations in a number of its markets. It's current CEO is Katie Foster; and is part of the Arcadia Group, which is controlled by Sir Philip Green. Originally known as Top Shop, it began life as a brand extension of the department store Peter Robinson in the 1960s and originally sold fashion by young British designers, such as Mary Quant and Stirling Cooper. Expanding rapidly during the 1970s and changing its name to Topshop, it struggled during the 1980s before being revived from the late 1990s on by focusing ... more on Wikipedia

Topshop is ranked on...

#73 of 90 The Best Prom Dress Designers 5k VOTES The best prom dress designers manage to combine updated style and classic beauty into designs that make for some of the most...
#25 of 44 Essential Brands For Your Hipster Lifestyle 21k VOTES Whether you are a hipster or you're just "asking for a friend," you may find this list of hipster brands useful. N...
#5 of 122 Trendy Women's Online Fashion Boutiques 983 VOTES Websites specializing in trendy fashion clothing & accessories for women, including boutiques that you can only find onl...
#96 of 125 The Best Designer Sunglasses Brands 39.7k VOTES What are the best designer sunglasses? If you're fashion conscious, you have likely asked yourself this question before...
#47 of 50 The Best Perfume Brands 1.4k VOTES Everyone loves the smell of designer perfume; while it may seem like an insignificant purchase to make, having the right sce...
#52 of 66 The Best Denim Brands 22.9k VOTES The best jeans and denim brands, much like the cut of the pants themselves, are a matter of opinion and often functionality....
#10 of 67 People who voted for Topshop... are 4x more likely to vote for Forever 21 on this list are 7x more likely to vote for Urban Outfitters on this list The Top Teenage Clothes Websites 66.3k VOTES Websites specializing in teenage clothes shopping and commerce. These online clothes shopping sites provide a wide variety o...
#6 of 38 The Best Fast Fashion Brands 12.1k VOTES What you wear can express a lot about your personality. Maybe you're the cool, laid-back type, most comfortable in a pair of...
#3 of 25 The Best Fast Fashion Stores 493 VOTES Trends change fast, and you have to be quick if you want to try out the hot new look of the moment. That's where these retai...
#27 of 51 The Best Teenage Makeup Brands 16.4k VOTES Your teenager is a young woman with expensive taste and you have an inexpensive budget; if you’re the type who thrives on ge...
#11 of 48 The Best Women's Leather Jacket Brands 337 VOTES Who doesn’t love the look and feel of a leather jacket? If you’ve ever asked the question, “What are the best women’s leathe...

Topshop is also found on...