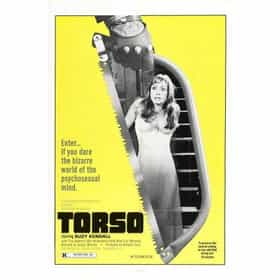 Torso is an Italian giallo thriller directed by Sergio Martino. The film was shot on location in Perugia and the Italian countryside in early 1972, and was subsequently released in 1973. Torso is considered to be one of the forerunners of the modern slasher genre and has developed a cult following among fans of the giallo genre. Torso was released on DVD by Anchor Bay Entertainment in 2000 and on Blu-ray by Blue Underground in a new High Definition transfer on August 30, 2011. ... more on Wikipedia

Torso is ranked on...

#10 of 60 The Best Giallo Movies 2.7k VOTES A list of all the best giallo movies ever made, many of which are streaming on Netflix and Amazon Prime. This list&nbsp...
#10 of 40 The Best Slashers of the 1970s 709 VOTES For all you horror fanatics out there, we're ranking the best 70's slasher movies of all time, with the help of your votes. ...
#138 of 181 The Best Slasher Movies 90.2k VOTES A list of the best slasher movies. These are some of the best slasher films ever made, but if you feel we've missed one, ple...
#99 of 104 The Best Horror Movies of 1973 657 VOTES List of the best 1973 horror movies, ranked by how many upvotes they've received by other fans of the genre. All types of sc...
#6 of 19 The Best Suzy Kendall Movies 74 VOTES List of the best Suzy Kendall movies, ranked best to worst with movie trailers when available. Suzy Kendall's highest grossi...

Torso is also found on...