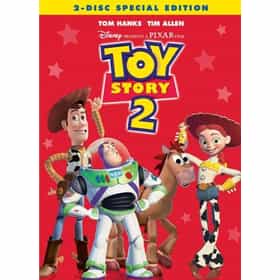 Toy Story 2 is a 1999 American computer-animated comedy adventure film produced by Pixar Animation Studios and released by Walt Disney Pictures. Directed by John Lasseter and co-directed by Lee Unkrich and Ash Brannon, it is the sequel to the 1995 film Toy Story. In the film, Woody is taken by a toy collector, prompting Buzz Lightyear and his friends to vow to rescue him, but Woody is then tempted by the idea of immortality in a museum. Many of the original characters and voices from Toy Story return for this sequel, and several new characters—including Jessie, Barbie, and Mrs. Potato Head —are introduced. Disney initially envisioned the film as a direct-to-video sequel. ... more on Wikipedia