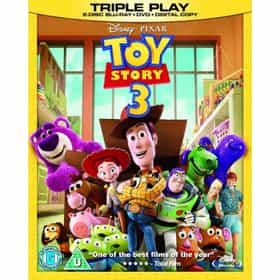 Toy Story 3 is a 2010 American 3D computer-animated comedy film, and the third film in the Toy Story series. It was produced by Pixar Animation Studios and released by Walt Disney Pictures. Directed by Lee Unkrich, the screenplay was written by Michael Arndt, while Unkrich wrote the story along with John Lasseter and Andrew Stanton, respectively director and co-writer of the first two films. The film was released worldwide from June through October in the Disney Digital 3-D, RealD, and IMAX 3D formats. Toy Story 3 was the first film to be released theatrically with Dolby Surround 7.1 sound. The plot focuses on the toys Woody, Buzz Lightyear, and their friends dealing with an uncertain ... more on Wikipedia