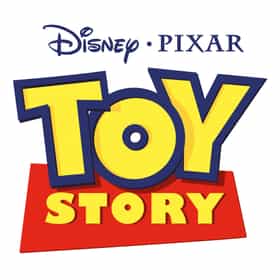 Toy Story is a 1995 American computer-animated buddy-comedy adventure film produced by Pixar Animation Studios and released by Walt Disney Pictures. Directed by John Lasseter, Toy Story was the first feature-length computer-animated film and the first theatrical film produced by Pixar. Toy Story follows a group of anthropomorphic toys who pretend to be lifeless whenever humans are present, and focuses on the relationship between Woody, a pullstring cowboy doll, and Buzz Lightyear, an astronaut action figure. The film was written by John Lasseter, Andrew Stanton, Joel Cohen, Alec Sokolow, and Joss Whedon, and featured music by Randy Newman. Its executive producers were Steve Jobs and ... more on Wikipedia

Toy Story 3
The Best Toy Story Characters in the Whole Series, Ranked 8.8k votes Pixar fans, we are ranking the greatest characters in the Toy Story franchise. From 1995's Toy Story to 2010's Toy Story 3, ...
Crazy Good Fan Theories About 'Toy Story' 200.6k views Pixar’s Toy Story has enraptured audiences since it first burst onto the big screen. Every time you think Woody and Buzz are...
32 Fun Facts About the Toy Story Movies 107.6k views Toy Story movies find a way to keep causing waves of nostalgia while still improving upon themselves and Toy Story behind th...
The Best Buzz Lightyear Quotes That Are Out Of This World 53 votes The best Buzz Lightyear quotes from the Toy Story franchise can make you realize how funny the character can be. Played by T...
The Best 'Toy Story' Quotes From Andy's Favorite Toys 47 votes The best quotes from Toy Story make you realize how great the movie really is, even if you haven't seen it in a while. Let's...

Toy Story is ranked on...

Toy Story is also found on...