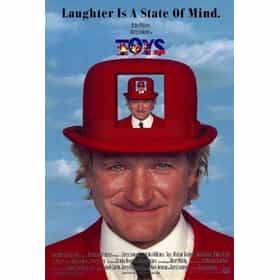 Toys is a 1992 fantasy comedy film directed by Barry Levinson and starring Robin Williams, Michael Gambon, Joan Cusack, Robin Wright, LL Cool J, and Jamie Foxx in his feature film debut. The film failed at the box office at the time of its release, despite its impressive cast and lavish filmmaking. Levinson was criticized for a lack of plot focus. The magnitude of perceived directorial failure was such that Levinson was consequently nominated for a Razzie Award for Worst Director, for which he lost to David Seltzer for Shining Through. The film did, however, receive Oscar nominations for Art Direction, and Costume Design. It was also entered into the 43rd Berlin International Film ... more on Wikipedia

Toys is ranked on...

Toys is also found on...