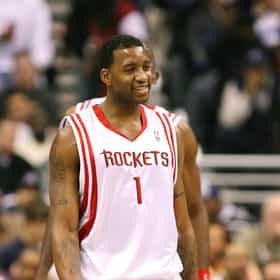 Tracy Lamar McGrady Jr. (born May 24, 1979) is an American former professional basketball player. He is best known for his career in the National Basketball Association (NBA), where he played as both a shooting guard and small forward. McGrady is a seven-time NBA All-Star, seven-time All-NBA selection, two-time NBA scoring champion, and one-time winner of the NBA Most Improved Player Award. He was also inducted into the Naismith Memorial Basketball Hall of Fame as part of the Class of 2017. McGrady entered the NBA straight out of high school and was selected as the ninth overall pick by the Toronto Raptors in the 1997 NBA draft. Beginning his career as a low-minute player, he gradually ... more on Wikipedia

Tracy McGrady is ranked on...

Tracy McGrady is also found on...