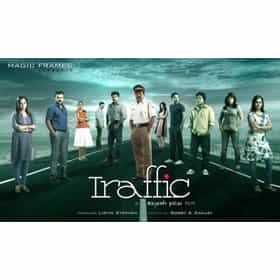 Traffic is a 2011 Malayalam thriller film written by brothers Bobby and Sanjay and directed by Rajesh Pillai. The film features an ensemble cast consisting of Sreenivasan, Rahman, Kunchako Boban, Anoop Menon, Vineeth Sreenivasan, Sandhya, Roma, Remya Nambeesan and Asif Ali. The film has its narrative in a hyperlink format. The film opened on 7 January 2011, to a positive reception. It is widely regarded as one of the defining movies of the Malayalam New Wave. A multi-narrative thriller that intertwines multiple stories around one particular incident, Traffic is inspired from an actual event that happened in Chennai. Owing to its critical and commercial success, Traffic was remade into ... more on Wikipedia

Traffic is ranked on...