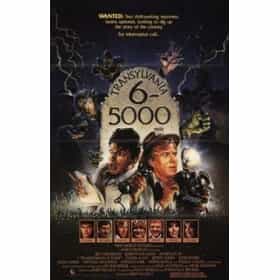 Transylvania 6-5000 is a 1985 American/Yugoslav horror/comedy movie about two tabloid reporters who travel to modern-day Transylvania to uncover the truth behind Frankenstein sightings. Along the way, they encounter other horror movie staples — a mummy, a werewolf, a vampire — each with a twist. Directed by Rudy De Luca, the film stars Jeff Goldblum, Ed Begley, Jr., Joseph Bologna, and Geena Davis. Notable other cast include Michael Richards, Carol Kane, Teresa Ganzel, John Byner, and Jeffrey Jones. The title is a pun on "Pennsylvania 6-5000", a song made famous by Glenn Miller. ... more on Wikipedia