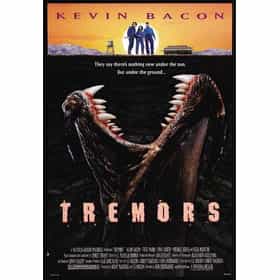 Tremors is a 1990 American western monster film directed by Ron Underwood, written by Brent Maddock, S. S. Wilson and Underwood, and starring Kevin Bacon, Fred Ward, Finn Carter, Michael Gross, and Reba McEntire. It was released by Universal Studios and is the first installment of the Tremors franchise. The film was received well by critics and holds an 84% favorable rating at the review aggregation website Rotten Tomatoes. The film was followed by three direct-to-video sequels, Tremors 2: Aftershocks, Tremors 3: Back to Perfection, and Tremors 4: The Legend Begins. Thirteen episodes of Tremors: The Series, a television program based on the film series, aired March through July 2003. ... more on Wikipedia

Tremors is ranked on...

Tremors is also found on...