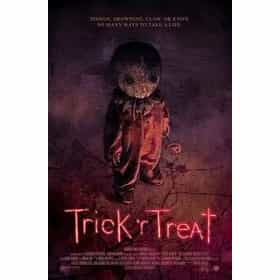 Trick 'r Treat is a 2007 American-Canadian anthology horror film written and directed by Michael Dougherty. The film stars Dylan Baker, Brian Cox and Anna Paquin, and centers on four Halloween-related horror stories. One common element that ties the stories together is the presence of Sam, a mysterious pint-sized trick-or-treater wearing shabby orange pajamas with a burlap sack over his head, that makes an appearance in all the stories whenever someone breaks Halloween traditions. Despite being delayed for two years and having a very limited theatrical release, the film received much critical acclaim and has since garnered a strong cult following. In October 2013, the filmmakers ... more on Wikipedia

Trick 'r Treat is ranked on...