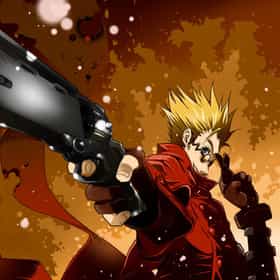 Trigun is a Japanese manga series written and illustrated by Yasuhiro Nightow. Both manga were adapted into an anime television series in 1998. Trigun revolves around a man known as "Vash the Stampede" and two Bernardelli Insurance Society employees, Meryl Stryfe and Milly Thompson, who follow him around in order to minimize the damages inevitably caused by his appearance. Most of the damage attributed to Vash is actually caused by bounty hunters in pursuit of the sixty billion double dollar bounty on Vash's head for the destruction of the city of July. ... more on Wikipedia

The Best Anime Like Trigun 468 votes Need some Trigun anime recommendations? It's easily one of the most classic anime ever made, so let's rank the best anime li...

Trigun is ranked on...

#33 of 851 People who voted for Trigun... People over 50 are 2x more likely to vote for this People Age 30 to 49 are 2x more likely to vote for this The Best Anime Series of All Time 6M VOTES You love anime but what tops this list of the best anime series ever made? Top anime series include shows like Death Note, A...
#7 of 133 People who voted for Trigun... also upvote Cowboy Bebop on The Best Anime Series of All Time also upvote Fullmetal Alchemist: Brotherhood on The Best Anime Series of All Time The Best Old School Anime From 1999 and Before 309.8k VOTES Young kids today don't know how good '80s anime and '90s anime really was. With the abundance of new anime that is available...
#357 of 717 The Best Cartoons of All Time 3M VOTES There have been many fantastic animated TV shows throughout the history, but which ones are the best? Some people think that...
#43 of 88 The 30+ Best Shounen Anime Of All Time 631k VOTES Shounen (or "shōnen") is one of the most popular genres of anime. It is geared toward tee...
#45 of 316 People who voted for Trigun... Men are 3x more likely to vote for this The Best English Dubbed Anime of All Time 1M VOTES If you're one of those people who only watches anime in Japanese, we don't blame you. English dubs can really ruin a series ...
#27 of 91 The Best Adventure Anime of All Time 150.6k VOTES Ready to go on an adventure? Here's our list of the best adventure anime of all time, ranked by anime fans like you. What cl...
#15 of 80 25+ Anime With Great Rewatch Value 89.2k VOTES Let's face it – sometimes you just don't feel like bothering with new anime. While new experiences can be rewarding, so...
#3 of 68 The Best Anime With Adult Protagonists 22.6k VOTES If you are in the 18+ age group, finding an anime show that doesn't revolve around high school or the trials of adolesc...
#40 of 185 The Best Action Anime of All Time 667.9k VOTES Action anime is hard to define, but if a show has car chases and epic battles, then it probably fits the genre's descri...
#31 of 76 The 25+ Best First Anime to Watch for New Fans 74.1k VOTES Do you remember your first anime? For this list we're ranking the best first anime to watch, with the help of your votes. Wh...
#42 of 81 The 30+ Best Anime for Teens 95.9k VOTES You might think that all anime is good for teens to watch, but there are some very sexual and violent series out there that ...
#105 of 154 The Best Anime Soundtracks of All Time 88.3k VOTES What is the best anime OST of all time? That's not an easy question to answer, but thanks to your votes on this list, we're ...
#59 of 62 The Best Science Fiction Franchises of All Time 35k VOTES Science fiction is a very popular genre in books, films, video games, and television shows. Some of the biggest grossing mov...
#7 of 27 The 25+ Best Anime With Only One Season 44.5k VOTES Some of the best anime can turn sour for refusing to end quietly. Thus, some studios have opted to release only one sea...
#15 of 18 19 Anime That Almost Everyone Starts With 65.8k VOTES Every anime fan has a starter anime, that first series that really inspired them to keep watching. For many fans, their...
#4 of 41 The Best Post-Apocalyptic Anime of All Time 17.1k VOTES In each of these post-apocalyptic anime series on this list, the world has pretty much gone to hell. Since there are so many...
#1 of 32 The Best Western Anime of All Time 8.5k VOTES For all the gunslingers out there, we're ranking the best western anime of all time, and we're letting you vote for your fav...
#4 of 18 The 18 Coolest Anime Guns Of All Time 13.1k VOTES One of anime's biggest draws lies in its battle and fight scenes, always made more epic by the introduction of cool guns and...
#6 of 20 20 Anime Without Fanservice You Can Comfortably Watch In Public 4.8k VOTES Finding anime that doesn't have fan service is challenging, to put it mildly. Sometimes it feels like it's in everything, no...
#7 of 21 The Best Anime Like Space Dandy 211 VOTES Need some Space Dandy anime recommendations? Since this space opera is such a unique series, let's rank the best a...
#6 of 13 The 13 Best Anime Like Hellsing 470 VOTES If you haven’t yet watched the anime Hellsing, you absolutely should; it’s a classic and one of the best vampire-themed seri...
#7 of 13 The 13 Best Anime Like Black Lagoon 762 VOTES Are you experiencing the Black Lagoon blues? Have you binged every anime episode, movie, and manga volume about the sadistic...

Trigun is also found on...