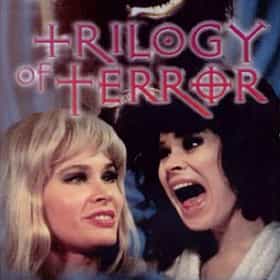 Trilogy of Terror is a made-for-television anthology horror film, first aired as an ABC Movie of the Week on March 4, 1975. The film, directed by Dan Curtis, starred Karen Black. All three segments are based on unrelated short stories written by Richard Matheson. Each segment title is the name of each story's protagonist, all played by Black. Black initially turned down the project, but reconsidered when her then-husband, Robert Burton, was cast. A television film sequel, Trilogy of Terror II, written and also directed by Dan Curtis was released in 1996. ... more on Wikipedia

Trilogy of Terror is ranked on...

#260 of 816 People who voted for Trilogy of Terror... are 5x more likely to vote for The Wolf Man on this list are 6x more likely to vote for The Blob on this list The Best Horror Movies Of All Time 1.1M VOTES Horror movies, ranked by adrenaline junkies worldwide. Anyone can vote on this CrowdRanked list, and can even add your own f...
#5 of 38 The Best Horror Movies About Puppets and Dummies 1k VOTES Puppets are already creepy enough on their own, but horror movies about puppets take it to another level. This list ranks th...
#22 of 132 The Best '70s Horror Movies 50.9k VOTES List of the best '70s horror movies, ranked by horror buffs, film buffs, and Ranker buffs. President Richard Nixon’s resigna...
#134 of 207 The Best Classic Horror Movies 84.6k VOTES If you’re a true horror film enthusiast then you’ll recognize these famous directors and the movies that earned them worldwi...
#20 of 61 The Scariest 1970s Horror Movies 7.9k VOTES The 1970s were an influential decade during which major historical events occurred – not to mention the many awesome horror ...
#19 of 34 The Best Evil Doll Horror Movies 4.1k VOTES A list of the best evil doll movies ever made, ranked by movie fans with film trailers when available. This evil doll movie ...

Trilogy of Terror is also found on...