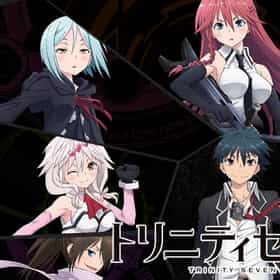 Trinity Seven is a fantasy romantic comedy manga series by Kenji Saitō with art by Akinari Nao. An anime television series adaptation by Seven Arcs Pictures aired between October 2014 and December 2014. An anime film adaptation titled Trinity Seven the Movie: The Eternal Library and the Alchemist Girl premiered on February 25, 2017. A second film adaptation has been announced. Arata Kasuga lived a normal life together with his cousin and childhood friend Hijiri Kasuga in a small town. However, everything changes on the day of the Black Sun, which caused the Breakdown Phenomenon which destroys the town where he lived and takes Hijiri away. As Hijiri starts disappearing, she hangs a ... more on Wikipedia

Trinity Seven: 7-nin no Masho Tsukai is ranked on...

#108 of 891 The Best Anime Series of All Time 5.7M VOTES You love anime but what tops this list of the best anime series ever made? Top anime series include shows like Death Note, A...
#73 of 132 The Best Supernatural Anime 155.7k VOTES Do you have a taste for the supernatural when you watch anime? There's nothing wrong with that. In fact plenty of anime seri...
#5 of 39 The 25+ Best Ecchi Action Anime Ever Made 49.4k VOTES Since ecchi has so many sub genres, we present you with the best ecchi action anime of all time, ranked by fans like you. Wh...
#9 of 79 The Best Harem Manga of All Time 17.5k VOTES If there's one type of character you should be jealous of, it's the main character of a harem manga. He's surrounded by beau...
#2 of 20 15+ Good Anime Like High School DxD 24.6k VOTES If you're looking for anime like High School DxD, we've got you covered. This list ranks good shows that are similar to High...
#10 of 53 The Best Ecchi Manga of All Time 31.2k VOTES When it comes to manga, there's no doubt that the ecchi genre is extremely popular among readers. That being said, what is...
#4 of 24 The Best Anime Like Tokyo Ravens 442 VOTES Need some Tokyo Ravens anime recommendations? Since it's such a fun series, let's rank the best anime like To...
#7 of 30 The Best Anime Like Campione! 891 VOTES Need some Campione anime recommendations? Since it's such a unique series, let's rank the best anime like Cam...
#5 of 19 The Best Anime Like Demon King Daimao 1.6k VOTES Also known as Demon King Daimao, the TV anime Ichiban Ushiro No Daimaou adapts the first five volumes of the light nove...
#7 of 31 The Best Anime Like Chivalry Of A Failed Knight 3.1k VOTES Need some Chivalry Of A Failed Knight anime recommendations? Since it's an extremely popular series, let's rank th...
#4 of 102 The Best Harem Anime Of All Time 407.1k VOTES List of the best Harem anime, voted on by Ranker's anime community. If you're not familiar with the harem genre, it usually ...
#5 of 24 The Best Anime Like The Testament of Sister New Devil 2k VOTES Need some The Testament of Sister New Devil anime recommendations? Since it's such a great series, let's rank the ...