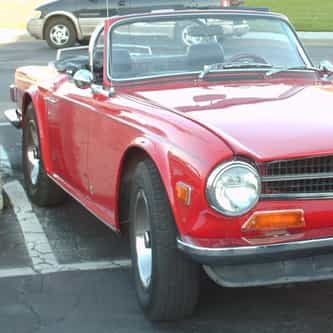 The Triumph TR6 is a British six-cylinder sports car and the best-seller of the TR range built by Triumph when production ended in July 1976. This record was then surpassed by the TR7. Of the 94,619 TR6s produced, 86,249 were exported; only 8,370 were sold in the UK. The bodywork closely resembled that of the previous model, the Triumph TR5, but the front and back ends were squared off, reportedly based on a consultancy contract involving Karmann. This is referred to as a Kamm tail, which ... more on Wikipedia