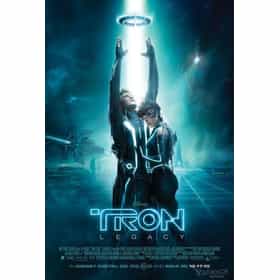 Tron: Legacy is a 2010 American science fiction film produced and released by Walt Disney Pictures. A sequel to the 1982 film Tron, it is directed by Joseph Kosinski, produced by Tron director Steven Lisberger and written by Adam Horowitz and Edward Kitsis, based on a story by Horowitz, Kitsis, Brian Klugman and Lee Sternthal. The cast includes Tron veterans Jeff Bridges and Bruce Boxleitner, who reprised their roles as Kevin Flynn and Alan Bradley, as well as Garrett Hedlund, Olivia Wilde, Beau Garrett, Michael Sheen and James Frain. The story follows Flynn's son Sam who responds to a message from his long-lost father and is transported into a virtual reality called the Grid, where ... more on Wikipedia

Tron: Legacy is ranked on...

Tron: Legacy is also found on...