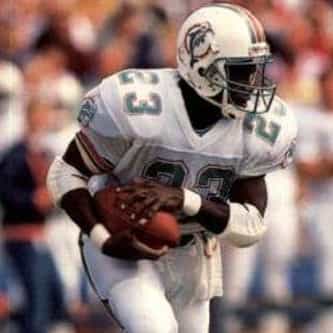 Troy Edwin Stradford (born September 11, 1964) is a former professional American football running back who was selected by the Miami Dolphins in the fourth round of the 1987 NFL Draft. Stradford won the 1987 Offensive Rookie of the Year Award for the Dolphins and played for Miami until the end of the 1990 season. He lasted just two more years in the NFL and played for the Kansas City Chiefs, the Detroit Lions, and the Los Angeles Rams from 1991 to 1992. Stradford grew up in Linden, New ... more on Wikipedia

Troy Stradford IS LISTED ON