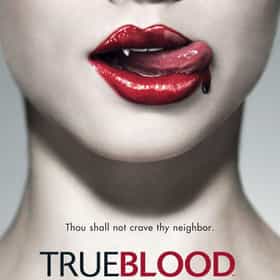 True Blood is an American television drama series produced and created by Alan Ball. It is based on The Southern Vampire Mysteries series of novels by Charlaine Harris, detailing the co-existence of vampires and humans in Bon Temps, a fictional small town in northwestern Louisiana. The series centers on the adventures of Sookie Stackhouse, a telepathic waitress with an otherworldly quality. The show was broadcast on the premium cable network HBO in the United States. It was produced by HBO in association with Ball's production company, Your Face Goes Here Entertainment. The series premiered on September 7, 2008 and concluded on August 24, 2014, comprising seven seasons and 80 episodes. ... more on Wikipedia

American Horror Story
The Best True Blood Characters of All Time 9.3k votes List of the best True Blood characters, with pictures and character bios when available. With such a great cast of character...
The Most Important Episodes Of 'True Blood' 540 votes When it comes to True Blood episodes you can't miss, there a number of dramatic, grisly, raunchy, table-turning moments that...
The Hottest Guys on True Blood 7k votes Who are the hottest guys on True Blood? That's a tough question, because this HBO vampire drama is chock full of some of the...
The Best True Blood Quotes 967 votes HBO's hit television series True Blood has been filled with funny and memorable lines from the very first episode when viewe...
Books Like the Sookie Stackhouse Series 729 votes ﻿What are some books like the Sookie Stackhouse series? If you're finished reading Charlaine Harris' Southern Vampire Myster...
The Best True Blood Episodes 500 votes List of the best True Blood episodes, as voted on by other fans of the series. This sexy series about vampires and the sup...
The Best Seasons of 'True Blood' 1.2k votes Every season of True Blood was great, but which seasons really stood out? In the fictional town of Bon Temps, Louisiana, Soo...

True Blood is ranked on...