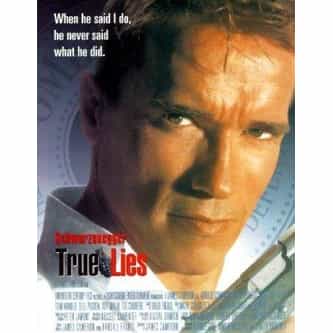 Tagline
When he said I do
he didn't say what he did.

True Lies is a 1994 American action-comedy film written and directed by James Cameron, and starring Arnold Schwarzenegger and Jamie Lee Curtis in the lead roles with Tom Arnold, Bill Paxton, Eliza Dushku, Grant Heslov and Charlton Heston in supporting roles. The movie also features Tia Carrere and Art Malik in villain roles. It is loosely based on the 1991 French comedy film La Totale!. True Lies was the first Lightstorm Entertainment project to be distributed under Cameron's multi-million ... more on Wikipedia

True Lies IS LISTED ON