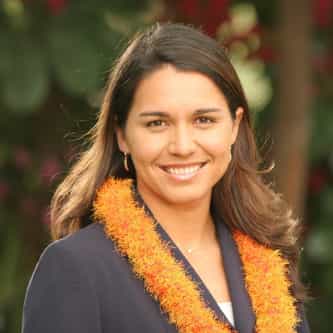 Tulsi Gabbard (; born April 12, 1981) is an American politician and military combat veteran serving as the U.S. Representative for Hawaii's 2nd congressional district. She is a member of the Democratic Party. Elected in 2012, she became the first Samoan American and the first Hindu member of the United States Congress. Gabbard served in the Hawaii House of Representatives from 2002 to 2004. When she was elected to the Hawaii House of Representatives at age 21, she was the youngest woman to ... more on Wikipedia

Tulsi Gabbard IS LISTED ON