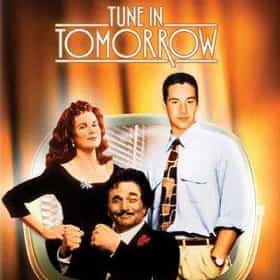 Tune in Tomorrow is a 1990 film comedy directed by Jon Amiel. It is based on the Mario Vargas Llosa novel Aunt Julia and the Scriptwriter, and was released under that name in many countries. Relocated from the novel’s setting in 1950s-era Lima, Peru to New Orleans, Louisiana that same decade, it stars Peter Falk, Keanu Reeves and Barbara Hershey in a story surrounding a radio drama and love. Supporting roles were filled by actors including Elizabeth McGovern, Hope Lange, Henry Gibson, John Larroquette, Buck Henry, Dedee Pfeiffer and the Neville Brothers. The soundtrack for the film was composed by Wynton Marsalis, who makes a cameo appearance with various members of his band. ... more on Wikipedia

Tune in Tomorrow is ranked on...

Tune in Tomorrow is also found on...