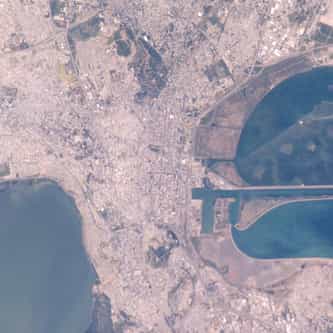 Tunis is the capital of Tunisia. It is Tunisia's largest city, the greater metropolitan area holding some 2,700,000 inhabitants. Situated on a large Mediterranean Sea gulf, behind the Lake of Tunis and the port of La Goulette, the city extends along the coastal plain and the hills that surround it. At its center more modern development lies the old medina. Beyond this district lie the suburbs of Carthage, La Marsa, and Sidi Bou Said. Just through the Sea Gate begins the modern city, or ... more on Wikipedia

Tunis IS LISTED ON