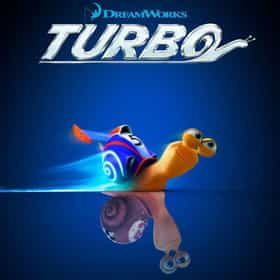 Turbo is a 2013 American 3D computer-animated comedy sports film produced by DreamWorks Animation and distributed by 20th Century Fox. It is based on an original idea by David Soren, who also directed the film. Set in Los Angeles, the film features an ordinary garden snail whose dream to become the fastest snail in the world comes true. The film was released on July 17, 2013. The film stars the voices of Ryan Reynolds, Paul Giamatti, Michael Peña, Snoop Dogg, Maya Rudolph, Michelle Rodriguez and Samuel L. Jackson. The film has been followed by a television series, titled Turbo FAST, which first aired on Netflix on December 24, 2013. ... more on Wikipedia

Turbo is ranked on...

Turbo is also found on...