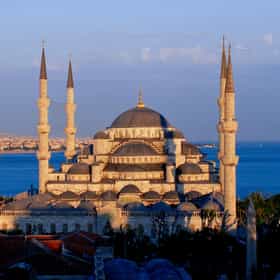 Turkey, officially the Republic of Turkey, is a parliamentary republic largely located in Western Asia with the portion of Eastern Thrace in Southeastern Europe. Turkey is bordered by eight countries: Bulgaria to the northwest; Greece to the west; Georgia to the northeast; Armenia, Iran and the Azerbaijani exclave of Nakhchivan to the east; and Iraq and Syria to the south. The Mediterranean Sea is to the south; the Aegean Sea to the west; and the Black Sea to the north. The Sea of Marmara, the Bosphorus and the Dardanelles demarcate the boundary between Thrace and Anatolia; they also separate Europe and Asia. Turkey's location at the crossroads of Europe and Asia makes it a country of ... more on Wikipedia

The Best Soccer Players from Turkey 25.2k votes Who comes to mind when you think of the best Turkish soccer players of all time? For many soccer fans, famous footballers su...
The Top Must-See Attractions in Istanbul 1.5k votes List of best things to do in Istanbul. What are the top attractions in Istanbul, Turkey? This list ranks the most popular th...

Turkey is ranked on...

Turkey is also found on...