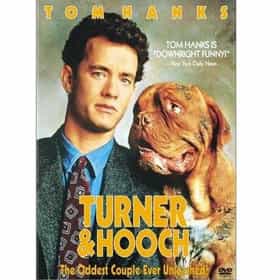 Turner & Hooch is a 1989 American comedy-thriller film starring Tom Hanks and Beasley the Dog as the eponymous characters, Turner and Hooch respectively. The film also co-stars Mare Winningham, Craig T. Nelson and Reginald VelJohnson. It was directed by Roger Spottiswoode; the film was originally slated to be directed by Henry Winkler, but he was terminated because of his "creative differences". It was co-written by Michael Blodgett of Beyond the Valley of the Dolls fame. Although K-9 was released prior to this film, Turner & Hooch became more popular and seemingly overshadowed its greater success, even though K-9 had a very similar plot. A pilot for a Turner & ... more on Wikipedia

Turner & Hooch is ranked on...

Turner & Hooch is also found on...