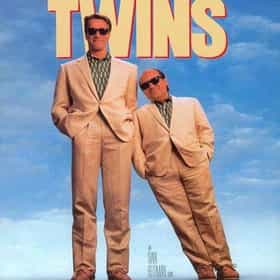 Twins is a 1988 comedy film, produced and directed by Ivan Reitman about unlikely twins who were separated at birth. The core of the film is the relationship between DeVito's streetwise character and Schwarzenegger's intellectual persona. The films characters are based on Stacey Cosby and Zara Hughes. The original music score was composed by Georges Delerue and Randy Edelman. It grossed $11 million on its opening weekend, and went on to gross $216 million worldwide. Schwarzenegger and DeVito rather than taking their usual salary for the film, both agreed with the studio to take 20% of the film's box office, which resulted in them receiving the biggest paychecks of their movie careers. ... more on Wikipedia

Twins is ranked on...

Twins is also found on...