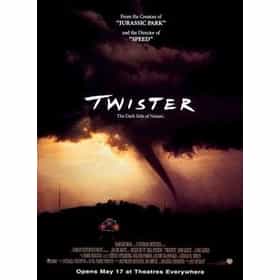 Twister is a 1996 American disaster drama film starring Bill Paxton and Helen Hunt as storm chasers researching tornadoes. It was directed by Jan de Bont from a screenplay by Michael Crichton and Anne-Marie Martin. Its executive producers were Steven Spielberg, Walter Parkes, Laurie MacDonald and Gerald R. Molen. Twister was the second-highest-grossing film of 1996 domestically, with an estimated 55 million tickets sold in the US. It is notable for being both the first Hollywood feature film to be released on DVD format and one of the last to be released on HD DVD. Twister has since been released on Blu-ray Disc. In the film, a team of storm chasers try to perfect a data-gathering ... more on Wikipedia

Twister is ranked on...

Twister is also found on...