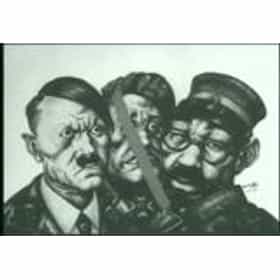 Two Down and One to Go

Two Down and One to Go was a short propaganda film produced in 1945; as its title might suggest, its overall message was that the first two Axis powers, Italy and Germany, had been defeated, but that one, Japan, still had to be dealt with. Presented by the Secretary of War and narrated by Army Chief of Staff George Marshall, the film is notable for its heavy use of animated graphics, spliced with stock footage. Opening with a fasces being splintered over Italy, and a swastika being exploded over Germany, the film cuts to an Arthur Szyk caricature of Benito Mussolini, Adolf Hitler and Hideki Tōjō, an X being superimposed on the respective dictators, then turning to Tojo. Gen. Marshall ... more on Wikipedia

Two Down and One to Go is also found on...