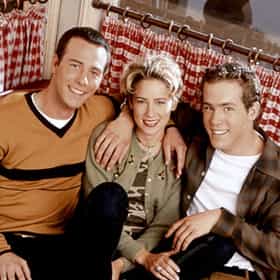 Two Guys and a Girl

Two Guys and a Girl is an American sitcom created by Kenny Schwartz and Danny Jacobson. It was originally broadcast on ABC from March 10, 1998, to May 16, 2001. Eighty-one episodes were aired over four seasons. The series stars Ryan Reynolds, Traylor Howard and Richard Ruccolo as the title characters. The second season saw the arrival of two additional recurring characters, Johnny Donnelly and Ashley Walker. In 2000, ABC bounced the sitcom from midweek to Friday night, leading to a steep drop in ratings. After the show moved back to Wednesday for a two-week trial in an attempt to revive its flagging support, the plug was pulled, and the series was cancelled in May 2001. The series ... more on Wikipedia

Two Guys and a Girl is ranked on...

#11 of 56 The Worst TV Show Titles of All Time 969 VOTES A title is incredibly important to a TV show. It's an essential element of branding that viewers need to remember the show, ...
#574 of 1,328 The Best Guilty Pleasure TV Shows 19.6k VOTES List of the best guilty pleasure TV shows, past and present, including sitcoms, dramas, reality shows, and game shows. These...
#63 of 242 The Best 1990s ABC Shows 13.2k VOTES Go back to the days of acid wash jeans with this list of '90s ABC shows, ranked from best to worst by nostalgic TV viewers. ...
#21 of 31 The Best TV Shows Set In Massachusetts 325 VOTES Most shows set in Massachusetts take place in Boston, and the bustling The City on a Hill is a great setting for a televisio...
#22 of 27 The Best Comedy Shows About Roommates, Ranked 1.5k VOTES Put a bunch of larger-than-life characters in cramped living quarters, and the sparks - and laughs - are bound to fly. ...

Two Guys and a Girl is also found on...