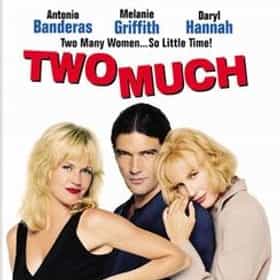 Two Much is a 1995 romantic screwball comedy film based on Donald Westlake's novel of the same name, and is also a remake of the 1984 French comedy film Le Jumeau, which was also based on Westlake's novel. Directed by Fernando Trueba, Two Much stars Antonio Banderas, Melanie Griffith, Daryl Hannah and Danny Aiello. It was released in the United States by Touchstone Pictures and Metro-Goldwyn-Mayer in other countries. Lew Soloff performed music for the film. ... more on Wikipedia

Two Much is ranked on...

Two Much is also found on...