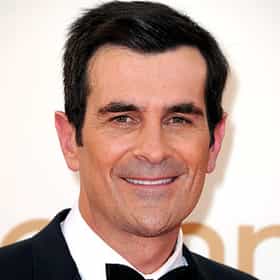 Tyler Gerald Burrell (born August 22, 1967) is an American actor and comedian. He originally rose to prominence in several roles on Broadway including Macbeth, and the off-Broadway plays Corners, The Blue Demon, Burn This, and Show People. His first feature film role was in 2001's Evolution. He also appeared in Black Hawk Down, Dawn of the Dead, Muppets Most Wanted and Marvel's The Incredible Hulk as Doc Samson. He has since voiced characters in a number of animated films Mr. Peabody & Sherman, Finding Dory and Storks. Burrell had recurring roles on the television series Out of Practice and Back to You. Burrell is best known for his role as Phil Dunphy in the ABC sitcom Modern ... more on Wikipedia

Ty Burrell is ranked on...

#706 of 1,149 The Best Actors in Film History 2.2M VOTES The best actors ever are ranked here in this list of the best actors in film history. These are the greatest actors ever to ...
#170 of 257 The Best Marvel Movie Actors Ever 575.5k VOTES Ah Marvel movies. It began in 1944 with serialized films of Captain America and 70 years later, are one of the biggest, most...
#44 of 50 Who Is The Most Famous Celebrity From Your State? 57.9k VOTES While the vast majority of high profile celebrities who hail from the entertainment industry make their home in Los Ang...
#40 of 50 Who's The Best Actor From Every State? 19.6k VOTES No matter what part of the US you're from, you can brag about the famous people who grew up in your state. If you're no...
#33 of 66 The Top Fantastic Four Reboot Casting Choices 18.8k VOTES The Fantastic 4 needs another reboot ASAP. That said, it's time to recast the Fantastic 4 ! This Fantastic 4 casting li...
#2 of 24 Who Would Star In 'Ferris Bueller's Day Off' If It Were Made Today? 4.7k VOTES We live in an age of reboots and remakes. Although there is currently no plan for a Ferris Bueller remake, it’s still fun to...
#31 of 150 Who Do You Wish Would Guest Star on the Muppet Show? 7.6k VOTES Following their brand-new big screen Disney adventure, "The Muppets," Jim Henson's stable of beloved felt characte...
#25 of 42 The Best Things from Oregon 1.4k VOTES Oregon is a pretty cool state. Lots of fun things come from the 33rd US State, like good coffee, sweet running shoes, and lo...
#11 of 13 Who Would Star In A Remake Of 'The Wizard Of Oz' Today? 183 VOTES The Wizard of Oz remains one of Hollywood's most enduring classics thanks to its charming performances, memorable ...
Celebrities Who Adopted Children 258.1k VIEWS Thinking of adopting? Let this list of celebrities who adopted children inspire you! Through the years many famous people ha...
75+ Straight Celebrities Who Fight for Gay Rights 195.7k VIEWS You don't have to be gay to fight for gay rights, as the straight celebrities on this list have proven. Several famous strai...
29 Celebrities Who Were In Sigma Chi 402k VIEWS   This list contains information about famous Sigma Chis, loosely ranked by fame and popularity. Sigma Chis is a Gree...
#11 of 13 How the Cast of Modern Family Aged from the First to Last Season 16 VOTES While enjoying family vacations, making career changes, and welcoming the next generation into the family, the characters of...

Ty Burrell is also found on...