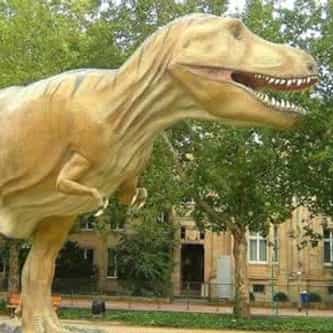 Tyrannosaurus is a genus of coelurosaurian theropod dinosaur. The species Tyrannosaurus rex (rex meaning "king" in Latin), often called T. rex or colloquially T-Rex, is one of the most well-represented of the large theropods. Tyrannosaurus lived throughout what is now western North America, on what was then an island continent known as Laramidia. Tyrannosaurus had a much wider range than other tyrannosaurids. Fossils are found in a variety of rock formations dating to the ... more on Wikipedia

Tyrannosaurus Rex IS LISTED ON

#14 of 17
10.3k VOTES Which Extinct Species Would You Bring Back From The Dead?
#1 of 10
5.6k VOTES The Scariest Types of Dinosaurs Ever to Walk the Earth
26.6k VIEWS List of Dinosaurs That Appear In Jurassic World