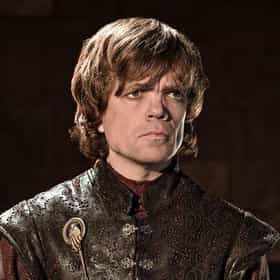 Tyrion Lannister is a fictional character in the A Song of Ice and Fire series of fantasy novels by American author George R. R. Martin, and its television adaptation Game of Thrones. Based on an idea that came to Martin while writing the 1981 novel Windhaven, Tyrion has been called one of the author's "finest creations" and most popular characters by The New York Times. Martin has named the character as his favorite in the series. Introduced in 1996's A Game of Thrones, Tyrion is a dwarf and member of House Lannister, one of the wealthiest and most powerful families in the fictional kingdom of Westeros. He subsequently appeared in Martin's A Clash of Kings and A Storm of ... more on Wikipedia

Tyrion Betrayed Daenerys In The Season 7 Finale, According To This Theory 187.4k views The Season 7 finale of Game of Thrones left fans with as many questions as answers. Fan theories have been flying around the...
The 14 Funniest Tyrion Lannister GIFs 1.2k votes "Game of Thrones" is a show ripe with powerful moments, witty dialogue, awesome imagery, and memorable moments. Wh...
Clues and Foreshadowing That Point to Tyrion Being a Targaryen 43k views SPOILERS have been unshackled in the bowels of Meereen so unless you're caught up on Game of Thrones and all of the Targarye...

Tyrion Lannister is ranked on...