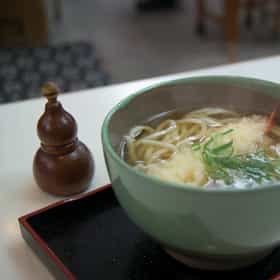 Udon is a type of thick wheat flour noodle of Japanese cuisine. Udon is often served hot as a noodle soup in its simplest form, as kake udon, in a mildly flavoured broth called kakejiru, which is made of dashi, soy sauce, and mirin. It is usually topped with thinly chopped scallions. Other common toppings include tempura, often prawn or kakiage, or aburaage, a type of deep-fried tofu pockets seasoned with sugar, mirin, and soy sauce. A thin slice of kamaboko, a halfmoon-shaped fish cake, is often added. Shichimi can be added to taste. The flavor of broth and topping vary from region to region. Usually, dark brown broth, made from dark soy sauce, is used in eastern Japan, and light ... more on Wikipedia

Udon is ranked on...

#4 of 53 The Best Types of Japanese Food 8.1k VOTES Who's up for sushi? Sashimi? Mochi? Tea? This is a list of the absolute best Japanese foods, ranked by deliciousness. Japan ...