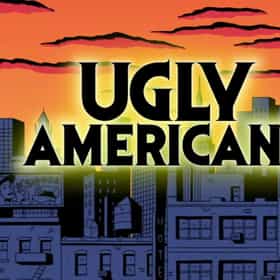 Ugly Americans is an American animated sitcom created by Devin Clark and developed by David M. Stern. The program focuses on the life of Mark Lilly, a social worker employed by the Department of Integration, in an alternate reality version of New York City inhabited by monsters and other creatures. Daniel Powell served as executive producer and Aaron Augenblick as supervising producer and animation director. Ugly Americans aired on Comedy Central from March 17, 2010 to April 25, 2012 with a total of 31 episodes over two seasons. ... more on Wikipedia

Ugly Americans is ranked on...

#620 of 780 The Best TV Shows to Binge Watch 1.2M VOTES Bored? Not anymore! These are the best TV shows for binge-watching. The greatest television shows in the world are ranked he...
#482 of 728 The Best Cartoons of All Time 2.9M VOTES There have been many fantastic animated TV shows throughout the history, but which ones are the best? Some people think that...
#74 of 233 People who voted for Ugly Americans... also upvote Friday the 13th Franchise on The Greatest Horror Films of All Time are 11x more likely to vote for Archer on this list The Best Adult Cartoon Shows in TV History 473.1k VOTES This is a list of the best adult cartoons that ever aired, ranked by your votes. In the 1990s, cartoons with R-rated humor b...
#100 of 237 The Best Cartoons to Watch Stoned 62.8k VOTES Do you often wonder, “what are the best shows to watch high?” Or, more specifically, “what are the best cartoons to watch hi...
#762 of 1,328 The Best Guilty Pleasure TV Shows 19.5k VOTES List of the best guilty pleasure TV shows, past and present, including sitcoms, dramas, reality shows, and game shows. These...
#3 of 15 The Best Comedy Central Cartoons Ever 2.1k VOTES Since its inception in the '90s, Comedy Central has experimented with high-concept adult animated programming. And while the...
#131 of 134 The Funniest Shows To Watch When You're Stoned 6.1k VOTES Getting high and watching television go hand-in-hand, but finding the perfect show to watch while getting your smoke on can ...
#25 of 33 The Best Zombie Related TV Series 260 VOTES These are the best zombie TV shows of all time, according to fans of the undead. There's something special about these shamb...
#12 of 15 Rick And Morty Is On Hiatus Once Again: Here Are 15 Series To Watch In The Meantime 9.4k VOTES Fans of Rick and Morty have found themselves in an unenviable position: the series is on hiatus, and there won't be any...
#110 of 132 The Best 2010s Sitcoms 21.6k VOTES The 2010s were a decade blessed (or, depending on how you look at it, cursed) with the rise of Peak TV and the dawning ...
#122 of 134 The Best Cartoon Series TV Shows 39.1k VOTES The very best cartoon series shows on television, ranked from best to worst. This list of the greatest cartoon series shows ...
#84 of 119 The Best Dark Comedy TV Shows 34.1k VOTES Do you like your comedy a little darker? This is a list of the very best dark comedy shows on television, ranked from best t...
#30 of 79 The Best Comedy Central TV Shows 14k VOTES List of popular Comedy Central shows, ranked from best to worst. This list of the top current and cancelled Comedy Central T...
#18 of 41 The Best Animated Horror Series Ever Made 1.2k VOTES Horror cartoons have glorious, gory freedom. Not only does the audience watching often get lulled into thinking it'll only b...
#32 of 45 What to Watch If You Love Rick and Morty 1.1k VOTES Wondering what to watch after Rick and Morty? The innovative animated series, considered one of the smartest shows out ...
#41 of 46 The Best 2010s Dark Comedy TV Shows 746 VOTES These are the best 2010s dark comedy TV shows, ranked from best to worst by user votes. Some of the top 2010s dark comedy se...