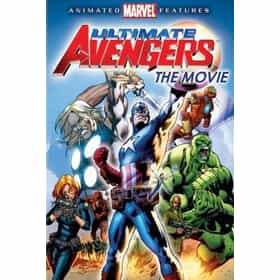 Ultimate Avengers is a superhero film and direct-to-DVD, animated film loosely based on the Marvel Comics limited series The Ultimates, and released by Lionsgate Home Entertainment as part of the Marvel Animated Features series. The DVD was released on February 21, 2006 in America, and in Europe on October 2, 2006. The film made its television debut on April 22, 2006 on Cartoon Network's Toonami block with a TV-PG-V rating. The film features Captain America, Iron Man, Giant Man, Wasp, Thor and Black Widow as they form the team The Avengers to foil an invasion by extraterrestrials known as the Chitauri. ... more on Wikipedia

Ultimate Avengers is ranked on...

#516 of 548 The Greatest Movies for Guys 134.3k VOTES The best guy movies of all time, ranked by fans and critics. This list includes some of the greatest guy movies ever to hit ...
#14 of 14 14 Cartoon Comic Book Movies That Are Better Than Live-Action Superhero Movies 16.7k VOTES The start of the 21st century marked the Golden Age of comic book movies. Never before were geeks more spoiled with not...
#21 of 57 The Best Avengers Versions Of All Time 1.6k VOTES The Avengers are comprised of the most recognizable superheroes on the planet. Each and every hero in the main team is almos...
#45 of 109 The Best Captain America Versions Of All Time 2.2k VOTES Captain America is one of the most prolific and long-running comic book heroes in history, both as a solo act and as a chart...
#65 of 67 The Best Movies Based on Marvel Comics 121.6k VOTES Although Marvel actually released several films before the modern explosion, they were, how you say? Not good. It wasn't unt...
#658 of 748 The Greatest Action Movies of All Time 426.3k VOTES The greatest action movies of all time starring some of the best action stars to have ever fought on screen. The best action...
#3 of 12 The Best Marvel Comics Animated Movies 6.4k VOTES List of animated movies based on Marvel Comics. These are animated films that star Marvel characters and take place within t...
#45 of 49 The Best Marvel Studios Movies List 7.3k VOTES List of Marvel Studios movies, ranked from best to worst, including trailers, genres, and release dates. Marvel Studios prod...
#41 of 60 The Best Marvel Comics Movies 28.1k VOTES A voter-ranked list of live action, theatrical movies based on Marvel Comics. These are films that star Marvel characters an...
#53 of 73 The Best PG-13 Animation Movies 845 VOTES List of PG-13 animation movies, ranked from best to worst with movie trailers when available. This list takes the best PG-13...
#39 of 50 The Best Action Movies of 2006 743 VOTES List of the best 2006 action movies, ranked by how many upvotes they've received by other fans of the genre. These movies gi...

Ultimate Avengers is also found on...