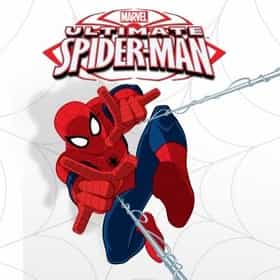 Ultimate Spider-Man is an American animated television series based on the Spider-Man comics published by Marvel Comics, including some elements of Marvel's Ultimate line of books. The series is written by Brian Michael Bendis, Paul Dini, and Man of Action. It was first announced to air on Disney XD in early 2012, and debuted alongside The Avengers: Earth's Mightiest Heroes '​ second season as part of the Marvel Universe programming block on April 1, 2012. ... more on Wikipedia

Ultimate Spider-Man is ranked on...

#149 of 477 The Greatest Animated Series Ever Made 645.5k VOTES The top animated series of all time include some of the best TV shows ever to flicker in your living room (or on your comput...
#170 of 717 People who voted for Ultimate Spider-Man... Men are 2x more likely to vote for this People under 30 are 2x more likely to vote for this The Best Cartoons of All Time 3M VOTES There have been many fantastic animated TV shows throughout the history, but which ones are the best? Some people think that...
#31 of 101 The Best Comic Book Cartoons & Animated Shows 59.8k VOTES A lot of children's first introduction to comic book characters come in the form of animated television shows. Sure, nowaday...
#45 of 50 The Best Carnage Versions Of All Time 4.1k VOTES Carnage is arguably one the best villains in all of Spider-Man rogue's gallery, and that is saying quite a bit consider...
#49 of 51 The Greatest Versions of Venom, Ranked 6.2k VOTES Venom is arguably one the best villains in all of Marvel Comics. He's certainly one of Spider-Man's greatest foes. There are...
#22 of 45 The Best Fantastic Four Versions Of All Time 525 VOTES The Fantastic Four is easily one of the more iconic superhero teams in the world. Created by the comic legends Stan Lee and ...
#26 of 101 The Best Iron Man Versions Of All Time 1.5k VOTES Iron Man is one of the most iconic superheroes in the history of comics, especially after Robert Downey, Jr.'s film adaptati...
#13 of 49 The Very Best Versions of Deadpool 4k VOTES Deadpool, though very recently created (1991) compared to most iconic characters in comic lore, has one of the biggest cult ...
#59 of 76 The Best Comic Book TV Show Theme Songs of All Time 4.2k VOTES Comic books have jumped from the page and to TV with theme songs that often capture just what's great about iconic character...
#39 of 58 The Best Animated Series of the 2010s, Ranked 52k VOTES These are the best 2010s cartoons and animated series, ranked from best to worst by user votes. The decade was truly a great...
#21 of 72 The Greatest Animated Superhero TV Series Ever 16k VOTES The greatest animated superhero shows are amazing works of art that typically don’t get as much attention as superhero block...
#22 of 54 The Best Disney XD TV Shows 20.7k VOTES List of popular Disney XD shows, ranked from best to worst. This list of the top current and cancelled Disney XD TV series i...
#15 of 55 The Best Action TV Shows For Kids Ever Made 583 VOTES Kids action shows can spark the imagination. A single series can make children believe they can grow up to be globe-trotting...