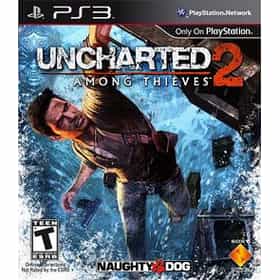 Uncharted 2: Among Thieves is a 2009 action-adventure third-person shooter platform video game developed by Naughty Dog and published by Sony Computer Entertainment for the PlayStation 3. It is a sequel to the 2007 game Uncharted: Drake's Fortune. It was first shown and announced on December 1, 2008. Officially announced in the January 2009 issue of Game Informer, it was released in October 2009. The story follows Nathan Drake, as he travels around the world, along with Chloe Frazer and old friends Elena Fisher and Victor Sullivan to find the fabled Cintimani Stone and Shangri-La in a race against Serbian mercenaries. The plot draws heavy inspiration from Marco Polo and his travels ... more on Wikipedia

Uncharted 2: Among Thieves is ranked on...

Uncharted 2: Among Thieves is also found on...