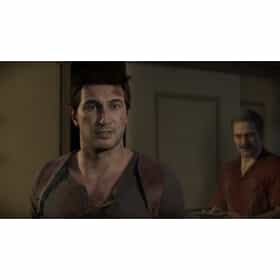 Uncharted 4: A Thief's End is a 2016 action-adventure game developed by Naughty Dog and published by Sony Computer Entertainment. It is the fourth main entry in the Uncharted series. Players control Nathan Drake, a former treasure hunter who is coaxed out of retirement by his estranged older brother Samuel. Together with Nathan's longtime partner, Sullivan, they search for clues for the location of Henry Avery's long-lost treasure. ... more on Wikipedia

#77 of 1,575 The 100+ Best Video Games of All Time, Ranked by Fans 986.2k VOTES These are the greatest games of all time, as voted on and reranked by gamers like yourself. Video games are more popular tha...
#8 of 61 The Best PlayStation 4 Games Of The 2010s 9.3k VOTES There are hundreds of amazing PS4 games that have been released this decade, but which are the best? The PlayStation 4’s lib...
#10 of 15 Plot Holes That Ruin Your Favorite Video Games 2k VOTES While video games don't require a great story to be fun, an engrossing narrative is always appreciated. Because of this, plo...
#2 of 119 The Best Playstation 4 Games Released So Far 41.2k VOTES If you've recently purchased a PS4 and are wondering which titles you should pick up immediately, you've come to the ri...
#96 of 450 The Best Video Game Soundtracks of All Time 52k VOTES Asking a group of gamers what the best video game soundtrack of all time is is like asking baseball fans who the best pitche...
#119 of 282 The Most Compelling Video Game Storylines Ever 346.4k VOTES   Video game stories range from the extremely simplistic to the staggeringly complex. While early games - and many co...
#80 of 132 The Best Games To Play Online 77.4k VOTES For many of us, there is no greater joy than putting on our headset, meeting in a lobby with friends, and gaming for hours o...
#4 of 57 The Best Playstation 4 Shooter Games You Should Be Playing 8.1k VOTES Considering it's one of the most popular genres in gaming today, it's not surprising that there are a ton of good shooter ga...
#7 of 15 Video Games That Taught You What Love Is 301 VOTES Love and storytelling go hand in hand, so it makes sense to see a ton of video games featuring love as a central theme. Deve...
#6 of 59 The Most Anticipated New Video Games of 2016 30.1k VOTES 2015 was a whirlwind of insanely awesome video games, but 2016's video game releases make it truly a year for the books. All...
#1 of 55 The Best Playstation 4 Action Games 1.2k VOTES Playstation 4 action games come in all shapes and sizes, but there truly is something for everyone when it comes to the acti...
#23 of 56 The Best Video Games of 2015 11.7k VOTES 2015 was a pretty good year for gamers. Although it might not have given us any new major systems, we did get a whole lot of...
#1 of 53 The Best Playstation 4 Adventure Games 1.9k VOTES With the arrival of No Man's Sky, it's time to rank the best Playstation 4 adventure games released on the console so far. A...
#1 of 19 19 Games You Need To Play If You Liked The Last Of Us 3.9k VOTES The Last of Us is simply one of the finest video game experiences ever crafted, giving rise to insane fan theories, cosplays...
#1 of 5 The Best Uncharted Games 252 VOTES One of the best third-person, action-adventure, and single-player franchises in recent history. Uncharted continues to&...
#109 of 194 The Best Science Fiction Games of All Time 11.2k VOTES This is a list of the best science fiction games of all time for any console or system, including cover art pictures when av...
#12 of 52 The Best PlayStation 4 Multiplayer Games 4.3k VOTES Looking for fun multiplayer games for PlayStation 4? This list ranks the best PS4 multiplayer games to play with your friend...
#9 of 25 Great Games For People Who Love 'The Outer Worlds' 100 VOTES The action RPG is one of the most well-populated (and well-loved) genres in gaming, and The Outer Worlds is one of the best ...
#21 of 25 Great Games For People Who Love 'Death Stranding' 101 VOTES If you've just finished playing Death Stranding and are looking to play the next great masterpiece, you’ve come to the right...