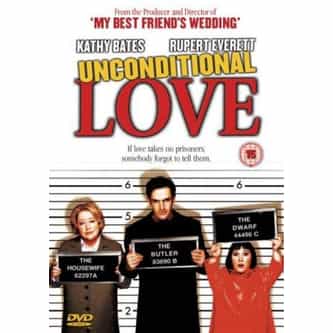 Unconditional Love is the title of a comedy film released in 2002. The film follows Grace Beasley who in the face of her failing marriage, and the death of her favorite pop star, learns the value and limitations of unconditional love, and the evils of sexism and homophobia. The film was directed by P.J. Hogan who also contributed to the final script. ... more on Wikipedia

Unconditional Love IS LISTED ON