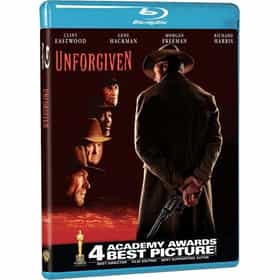 Unforgiven is a 1992 American Western film produced and directed by Clint Eastwood with a screenplay written by David Webb Peoples. The film portrays William Munny, an aging outlaw who takes on one more job years after he had turned to farming. A dark Western that deals frankly with the uglier aspects of life and how complicated truths are distorted into simplistic myths about the Old West, it stars Eastwood in the lead role, with Gene Hackman, Morgan Freeman and Richard Harris. Eastwood stated that the film would be his last Western for fear of repeating himself or imitating someone else's work. ... more on Wikipedia

Unforgiven is ranked on...

Unforgiven is also found on...